From: The National Cyclopaedia of American Biography Vol. VIII, pub. 1898 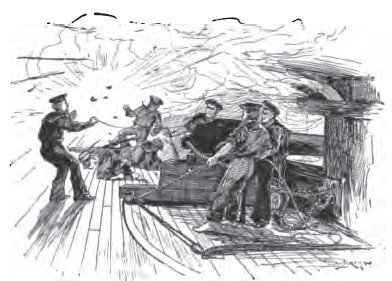 Robert Rhodes, naval officer, was born in Warwick, R. I., Apr. 12, 1840, son of Richard W. Rhodes. When sixteen years of age he entered the merchant marine service, and was engaged in trade with the eastern coast of Africa, and subsequently, in the employ of Amos d: Smith, he visited various parts of the Mediterranean and South America. Soon after the commencement of the civil war lie joined the 1st Rhode Island regiment, under Col. Burnside, and was a participant in the early fortunes of that regiment. He received an appointment of acting master's mate, and was attached to the bark Fernaudina, on the blockading station off Wilmington, N. C., and not long after was ordered to the gunboat Clifton, and joined the west gulf squadron, under Adm. Farragut. He wason active duty during the exciting scenes which finally terminated in the occupancy of New Orleans by the Federal troops under the command of Gen. Butler. The Clifton proceeded up the river and was actively engaged in the bombardment of Vicksburg, and came very near being completely destroyed by the shot of the enemy. Having been repaired, she was ordered to the coast of Texas, where she was almost constantly engaged with the Confederate forces. The following spring, 1863, the Clifton was employed to transfer a portion of Gen. Banks' army from Berwick to Franklyn in Louisiana. Although, while thus engaged and in subsequent adventures, the gunboat was often in most imminent peril, she managed to escape, and Lieut. Rhodes met with no serious casualty until Sept. 8, 1863. A fleet of vessels, consisting of twenty-three gunboats and transports, was advancing toward Sabme Pass. The Clifton took the lead, and had come within three hundred yards of a Confederate battery, which she was to silence, when she ran aground. A thirty-two-pound shot struck Lieut. Rhodes, nearly carrying away one of his legs, and he died at nine o'clock that evening.