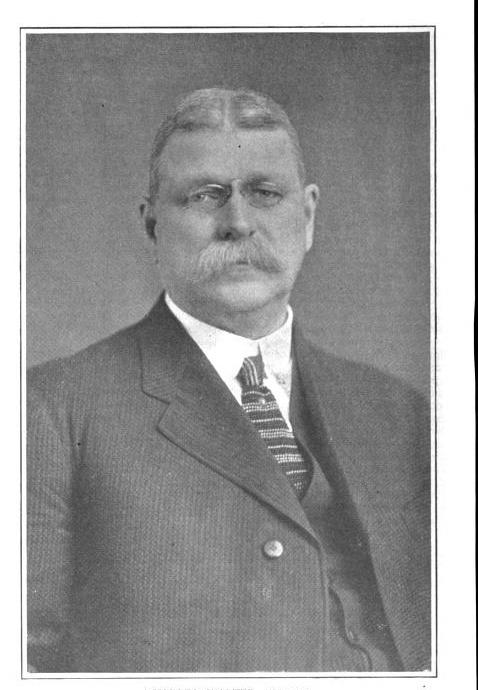 Mr. Rhodes was born in Baltimore, January 28, 1853, the son of George R. Rhodes of Nottingham, England, and Sophia R. Whyte of Baltimore. In childhood he went with his parents to Carroll County, Maryland. He was educated in the private school of Reverend John A. Munroe of Westminster, one of the best educators of his day, and went from school to Baltimore, where he entered the employ of The Baltimore and Ohio Railroad Company.

A friend who knew him as a boy at Westminster writes that he was noted for his attention to his studies, his determination to advance and for his strict regard for truth and honesty. He spent his entire business life in the service of The Baltimore and Ohio Railroad Company in its Treasury Department, being eighteen years old when he entered there February 12, 1869.

Fresh from the salubrity of the hills of Carroll, in all the enthusiasm and confidence of exuberant youth and health, he had come to make his way. He had coped with horses mastered them; why not men? He had the consciousness and poise of strength and limitless patient endurance. Such he was as a young man of twenty-seven when the writer went west. Upon my return to Baltimore, after a separation of thirteen years, I found him the same at forty. He then had a family. His mother was an invalid in Carroll County, stone blind and with two daughters. Every alternate Sunday he mounted his wheel and rode twenty-eight miles out of Baltimore to that mother who had taught him his Bible and the lessons of her religion, that she might not be disappointed in the comfort his attention afforded her. This was Rhodes. His health cost him nothing it was an endowment, why not bestow it generously? At the same time the Railroad Company was his business alma mater. His devotion to the customs and practices and history of The Baltimore and Ohio Railroad Company, to which he was as loyal as a votary to his patron saint, was a counterpart of that devotion he had for his mother. That is why he rose step by step upon a foundation of years of practical experience in personal contact with the men who directed the development of one of the leading institutions of our country at the time of its most active participation in forming our industrial history and financial system. He had as much pride in its antecedents as if they were personal and as much joy in its growth, influence and prosperity as if it were his offspring. This was a phase of his loyalty. It was his manly devotion to a cause. To him disloyalty or antagonism to a colleague or associate in the service was treason. He had his likes and dislikes, for he was human, but a breach in action was intolerable to him and he closed it with the whole of his big and efficient bulk. We had no personal intimacies; neither of us possessed the characteristics conducive to personal confidences, but for fifteen years he was my business twin. Hence these sentiments through the vista of years the vision is clearer, the end truer.

What is now said of Mr. Rhodes is nothing new here in his home and in the atmosphere where he passed his life. He was a quiet, unostentatious, courteous, capable officer with an invaluable acquaintance with the history of the Company, which is largely interwoven with the history of the city and state, and was always generously at the command of his associates. He was amongst a very select few with forty-six years continuous service in the financial department of the Company to his credit (and within one of being its head). It is pathetic that he did not survive to reach that goal, as he richly deserved and as he would have done. It was his praiseworthy hope and ambition, in which sympathized, and it comforts me to know that he knew it. All here young, old, high and low had an ardent affection for him.

The Society of Railway Financial Officers, of which Mr. Rhodes was second vice-president and in the association of which he took such pride and pleasure, memorialized him, viz:

The Society of Railway Financial Officers records with deep regret the death, on April 14, 1915, of Charles W. Rhodes, second vice-president, connected with the society from its inception and since 1910 a valued member of its Executive Committee.

With a wide experience obtained in the financial and banking department of a great railroad, where he rose from a junior position through various promo-, tions to the responsible position of assistant treasurer, he served his Company loyally, zealously and faithfully, and these qualities characterized his relations with this society.

He was easy of approach, of a kind and genial disposition, his advice and assistance were in constant demand, and such always met a ready response, and he freely gave of his time and thought to all matters which promoted the objects of the Society.

We mourn his untimely death and share the sorrow which has come to his family and friends.