From: The Annual biography and obituary, published in England in 1818.

This lady, born in the county of Salop, in the year 1756, was the daughter of Mr. Rhodes of Cann-Hall in the borough of Bridgnorth. At an early period of life, although never successfully wooed herself, yet she wooed the muses, and in the opinion of her friends, with no small degree of good fortune. Some of her neighbours, however, supposed that her verses did not rise above mediocrity; although all concurred in excepting her ballads, a taste for which she had cultivated by reading of the famous collection *, published by the late Dr. Percy, Bishop of Dromore. She also edited a work written by her nephew; composed several short and fugitive articles for her friends; and printed a novel with a most romantic name, long after she had left off the style and appellation of a spinster; having for some time back been called Mrs. Rhodes. This lady interposed at the election of members of parlia- ^nent, for the place of her nativity, in 1784, with a generous warmth, in support of a friend; and died at her house in East Castle Street, Bridgnorth, February 28, 1817, in the sixty-first year of her age,

List of the Works of the late Miss Rhodes.

1. Various Poetical Compositions, in early life, some of which were afterwards published.

John N. Rhodes was born to Joseph Rhodes, a well-known Leeds artist, was born in London in the year 1809, shortly before his father’s return to his native town in the West Riding of Yorkshire. 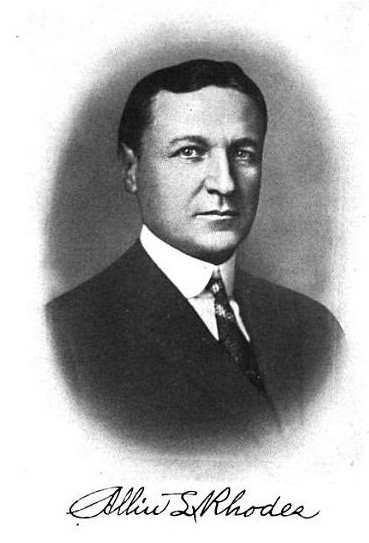 To read the biography in it’s entirety go here: http://www.rhodesfamily.org/bio_joseph_f_rhodes.php

Dr. John Edwin Rhodes, A. M., M. D., is a native of Bath, Summit county, Ohio, born on the 12th of February, 1851, and is a son of John and Rebecca Clark (Smith) Rhodes. His father was a well-to-do merchant, who, while Dr. Rhodes was still a child, removed to Akron, Ohio, and subsequently to South Bend, Indiana.

To read the biography in it’s entirety follow this link: http://www.rhodesfamily.org/bio_dr_john_edwin_rhodes,.php

Kevin Levin is a High School History Teacher and Civil War Historian. For the last three years he has been writing the blog ?Civil War Memory?.

In 2007 Kevin’s blog was honored with the Cliopatria Award for Best Individual Blog.

The following is about ?Civil War Memory? in Mr. Levin own words: ?I blog about subjects related to how Americans have chosen to remember and commemorate their Civil War. Topics cover a range of issues from Civil War historiography to issues in public history and the teaching of history on the high school level. To get a better sense of the range of topics covered on this site I highly recommend browsing the archives by category or by individual tags. You can also take advantage of the ?Related Posts? feature, which can be found at the end of individual posts and before the comments section.?
Here the link: http://cwmemory.com/

In 1909 a remarkable project was initiated by Russian photographer Sergey Mikhaylovich Prokudin-Gorsky. His mission was to record – in full and vibrant color – the vast and diverse Russian Empire.

To veiw more of these wonderful photos follow this link:
http://www.socyberty.com/History/The-Incredible-Century-Old-Color-Photography-of-Prokudin-Gorsky.797569

The place, according to a jokingly chalked board, is "somewhere in France". The time is the winter of 1915 and the spring and summer of 1916. Hundreds of thousands of British and Empire soldiers, are preparing for The Big Push, the biggest British offensive of the 1914-18 war to date. A local French photographer, almost certainly an amateur, possibly a farmer, has offered to take pictures for a few francs. Soldiers have queued to have a photograph taken to send back to their anxious but proud families in Britain or Australia or New Zealand.

Sometimes, the Tommies are snapped individually in front of the same battered door or in a pear and apple orchard. Sometimes they are photographed on horseback or in groups of comrades. A pretty six-year-old girl ? the photographer’s daughter? ? occasionally stands with the soldiers or sits on their knees: a reminder of their families, of human tenderness and of a time when there was no war.

?If you had an ancestor in the First World War and can identify any of these people, or are just interested in history–please check out this site.

To see all the photos follow this link: http://www.independent.co.uk/news/world/europe/exclusive-the-unseen-photographs-that-throw-new-light-on-the-first-world-war-1688443.html